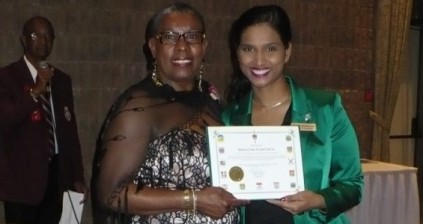 Malvern reaches another milestone, thirty three years, which was celebrated on Saturday October 11th 2014 at the Rembrandt Banquet Hall in Scarborough, with a dinner and dance.

There were the annual Cricket Awards and presentations of charitable donations for The Sickle Cell Association of Ontario, The Scarborough Women’s Centre, and for the second year The Elsie Boyce Memorial Scholarship Award which was presented to Miss Crystal-Jade Stanley-Parris.

The Vote of Thanks was delivered by Mrs. Maxine Pollard Vice President.

There was live entertainment by Ms. Lisa Howell, there was Steel Pan, and music was provided by DJ Nite Rider.

A Door prize of a trip to Barbados was donated by Marville Travel.